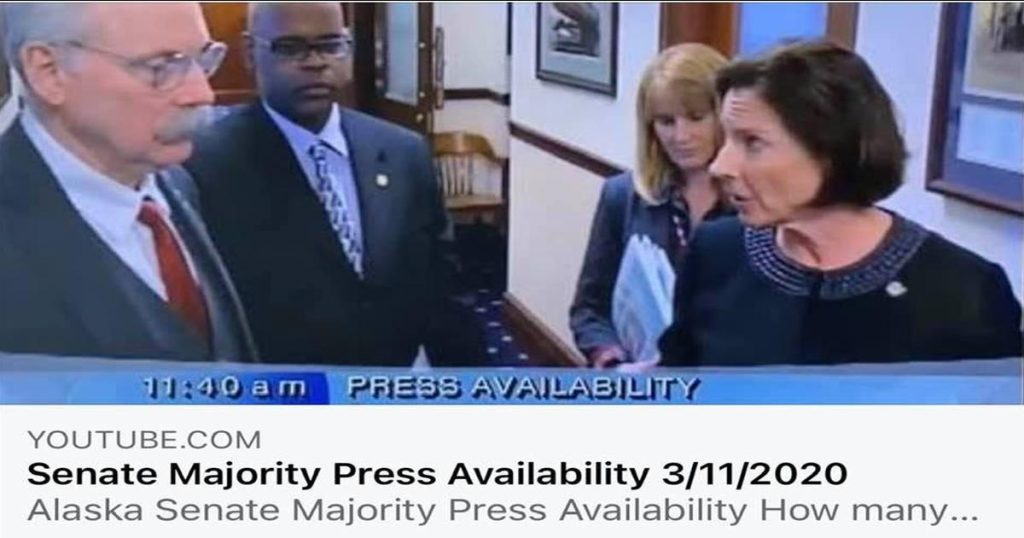 How many times can they lie to us about how bad things are?  Standing there trying to justify breaking Alaska’s Constitution, Statutes and Laws. Just to justify them stealing he entire PFD to pay for a budget that is not sustainable, which should have been cut to the bone nearly a decade ago now. Three out of the four above are bought, paid for and their strings are pulled, by Recall Dunleavy.  Who is Recall Dunleavy? (Alaska AFL-CIO, NEA Alaska, CIRI, Rasmuson Foundation, Alaska’s Judicial Branch, to name just a few.)

Here is a rundown of all the Candidates above, listed below:

Senator Cathy Giessel:
100% Owned by the Unions of Alaska.
Was Head of the Binding Caucus in the Senate.
100% PFD Thief.
Sold out her Constituents with broken promises to be elected.
The Heads of Alaska AFL-CIO pull her strings in Juneau and tell her what she is suppose to do.
Recall Dunleavy controls her Agenda

Senator David Wilson
Going to be a very interesting year for him.
The way he votes. He join the Democrat Party this year I don’t see him standing up with the Republicans.
Illegal Binding Caucus:  He has admitted more then once this year that he would rather be feasting at the table then collecting the scraps off to the side.

Senator Bert Stedman:
Rino through and through Sold out to the Democrats years ago.
100% PFD Thief
If he thought it would provide more Welfare to live off of. He would be first in line to sign you up.
Bought and Paid for by the Illegal Binding Caucus.

Senator Natasha von Imhof
Million Dollar Trust Fund Baby
Owned by Non-Profits.
Gave the Bulk of the Cares Act Money & Our PFD’s to her Family (Rasmuson Foundation) they control her Agenda in Juneau.
One of the Main Heads of the Illegal Binding Caucus in the Senate, without her blessing it will not get passed this year.
The Chair of the Finance committee that has everything to do with spending money.  (Can you say Conflict of Interest?)

Deeper Dive into who these people really are:

Senator Natasha von Imhof only cares about making sure her Families business the Rasmuson Foundations stays well funded using our PFD’s & the Cares Act Money. She has declared this many times.  “My Grandfather…” is always how that conversation seems to start coming from her. Imhof was counting on the Absentee Votes to carry her over the finish Line.   She really had nothing to worry about this election season.  The Non-Profits and Unions were all backing her to make it back to Juneau. Can’t kill the Golden Goose that keeps laying them the Golden Eggs.  She is the Number One reason that our Stimulus Check was Stripped back out of the Budget & why we didn’t receive our Statutory PFD.

I could go hours on who Senator Natasha von Imholf really is and what she is all about.  Click this link if you want to learn more about her.

Senator Natasha von Imhof Discusses How to Steal the PFD….

Never forget….  It is these four Democrat/Rino’s in the Senate who wrote the final bills that gave all the Covid-19 Cares Act Money our state received and handed Our PFD’s to the Special Interests of Alaska. While the rest of us are going to and have lost it all.  Without tourist coming into our State, Malls being closed, Restaurants doors that have been shuttered, Bars that can’t operate, Bed & Breakfasts, Hotels, all those jobs that have been lost, 16,000 and growing have been Permanently Lost in Anchorage, rent and mortgagees that never got paid. All these four care about was making sure those running Recall Dunleavy received the Lions Share.

Bert Stedman was the only one that I’m aware of that didn’t have a qualified challenger who could have removed him from office.  It looks like a lot of Ballot Trickery was happening in his district during the Primaries and many places didn’t even have Ballot to Vote On in the Primaries.  Some districts only received a Democrats Ballot to Vote on.  Sadly he is heading back to Juneau once again.  Senator Bert Stedman only cares about himself and making sure he votes as the Illegal Binding Caucus tells him to. He has Voted to steal our PFD’s Year After, Year, After Year. Never saw a spending bill that he wouldn’t vote yes for.

After sitting through several of the Candidate Forums. I have to say that Senator David Wilson has lost any respect I might of had for him. After declaring he is willing to and has sold out his Constituents Voices/Votes to be in the Illegal Binding Caucus. I will never support him again. Anybody that is willing to do that doesn’t deserve to go back to Juneau. That is why Alaskans should have been handing him his Pink Slip back on August 18, 2020.  Sadly he won in the General Election and will be heading back once again.  He will do as he has always done and that is to sell out our Voices/Votes, to be in the Illegal Binding Caucus.  After seeing the results of the Races in Play. Senator David Wilson would have lost by double digits if it wasn’t for the Republicans Splitting the Vote in the Primaries and with the very real possibility that “Ranked Choice Voting” will begin next year,  If his election comes up again while it is in place.  He won’t survive his next voting season.

The Democrats were hoping that Alaskans are “Too Stupid” to know Dan Mayfield is working for and is being financed by the Democrat Party in the Valley. they used him in the General Election to try and split the Republican Vote in the General Election, good thing that the Alaskans that live in the Valley are very Active in what happens in our local politics and didn’t fall for it.

If only Senator David Wilson would come out and declare he refuses to join “ANY Illegal Binding Caucus”, Voted No on anything but a Statutory PFD and stand strong on making the cuts to the Budget. I would have campaigned to put him back into office this year. But since he has openly admitted more than once this year, that he won’t do any of those things.

As for the other three pictured there. They don’t care about us. Senator Cathy Giessel was once again trying to lie to everyone with her Campaign Ads, claiming to be a champion of the PFD, that she was Saving the PFD for Future Generations.  Nothing but a bunch of lies, as she sat as the Senate President selling off our PFD’s to the Highest Lobbyist Bidders. Good thing she was handed her walking papers in the Primaries and glad to see Roger Holland is heading to Juneau after winning the General Election.

What once belonged to All Alaskans. These four are working hard to make sure it only goes to them.

Watch for yourselves as they talk about the Cares Act Money & the Budget.  How they brag about all the resources (Money) they will get to distributed around Alaska.  Here we are 9 months later and as you have heard.  Their Boastful claims made here, for what they were going to do.  Failed Miserably.