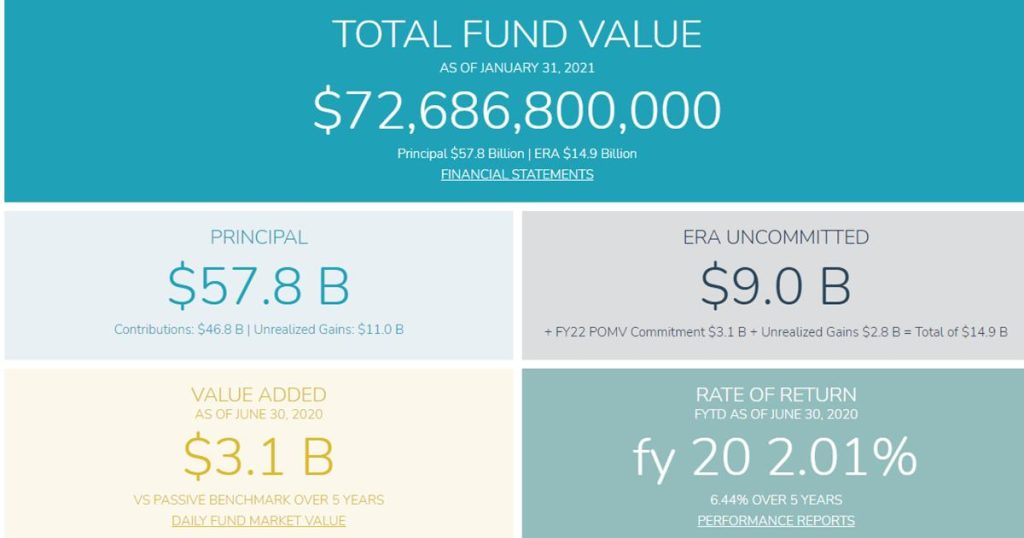 Remember our Legislators claimed because the Stock market had tanked for a very short time that we don’t have enough money in it. They are taking one bad month of the Market and saying we lost everything.

Liars! $14.9 Billion has been made this year. $9 Billion of that is actual cash not dependent of future gains once it’s sold, $3.1 Billion is their POMV that they are stealing to Fund Government with. They could have paid every penny they have stolen from us the last five years, kept all that pork in the budget that was Vetoed and still had Over $3 Billion “Cash on Hand” over what was in it before this years total earnings started and a Surplus of another $2.8 Billion if they were to cash out the unrealized Gains above.

Stop believing the Lies Alaskans. It took me two seconds to look up what the PFD ERA made this year. Stop the Theft!

Contact Save The PFD and become one of Alaska’s Permanent Fund Defenders!

As of today February 18, 2021.  The Stock Market is over 31,000.  Our Lawbreaking Legislators of Alaska, could have and still could, give Alaskans every penny they have stolen from us all since day one and still have a $6 Billion in record Profits sitting there until next year. But those greedy S.O.B.’s think only they are allowed to spend our money.

Stand Up for Your Rights Alaskans!

Save The PFD and become a Permanent Fund Defenders Today!

The $14.9 Billion in the Picture above is how much our PFD has earned in just this past year. They Owe Us All $7,700.00 they have stolen over the last five years. To pay us all back would only cost $5 Billion of the $14.9 Billion in Profits the fund has made in just the Past Year.  $3.1 Billion the will steal from it for their POMV draw.  Leaving a Whopping $6.8 Billion Dollars Profits this year.

Stop believing their lies when they say they can’t pay us our Statutory PFD. It’s not that they Can’t Pay it. It’s that they just don’t want to.

Below is the picture that was originally posted with this article.  You can compare the difference from when they were all claiming Doom and Gloom that the Market had completely destroyed any chances of getting our PFD’s.  But if you look at the new Featured Picture above.  You can clearly see the fund hit exactly where I had predicted it would be at by this time of the year.  News Flash for those still learning about the PFD Revenue Totals.  The final numbers for the year won’t be out until February.