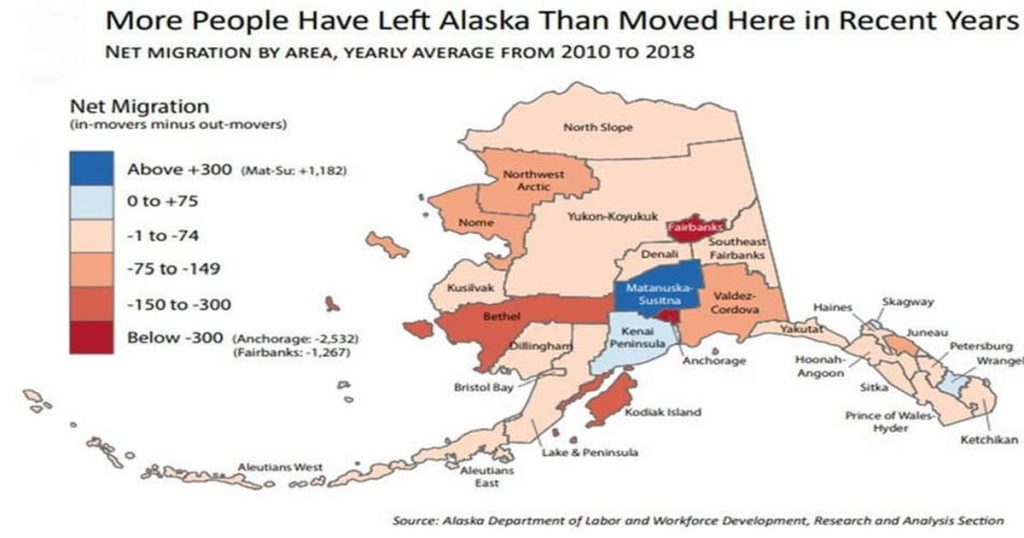 We Are Number One!!

Wow! What an Eye Opener this report is!

If I was to believe everything that Alaska Democrats, Alaska State Ombudsman, Alaska AFL-CIO and all the rest of the Special Interests out there has had to say about people that going to leave.  I would never believe what is in this report.

From Alaska Department of Labor & Workforce in 2019, Alaska will see 8,000 jobs lost.  The Democrats say this is due to the Budget that is about to be passed.  They want to blame this happening all on Governor Mike Dunleavy & that these potential job loses are so high because of his Budget Cuts, claiming it’s all his fault.

History though, tells us all a very different story. So is it really the Budgets Fault? Is it really Governor Mike Dunleavy  Who we are to blame for it happening?

Looking at the statistical numbers from past years. Looking from 1975-2018 we have had many population gains and statistically have lost more people after some major construction project ended and those high paying skilled labor jobs were no longer needed.  Like the building of Prudhoe Bay. 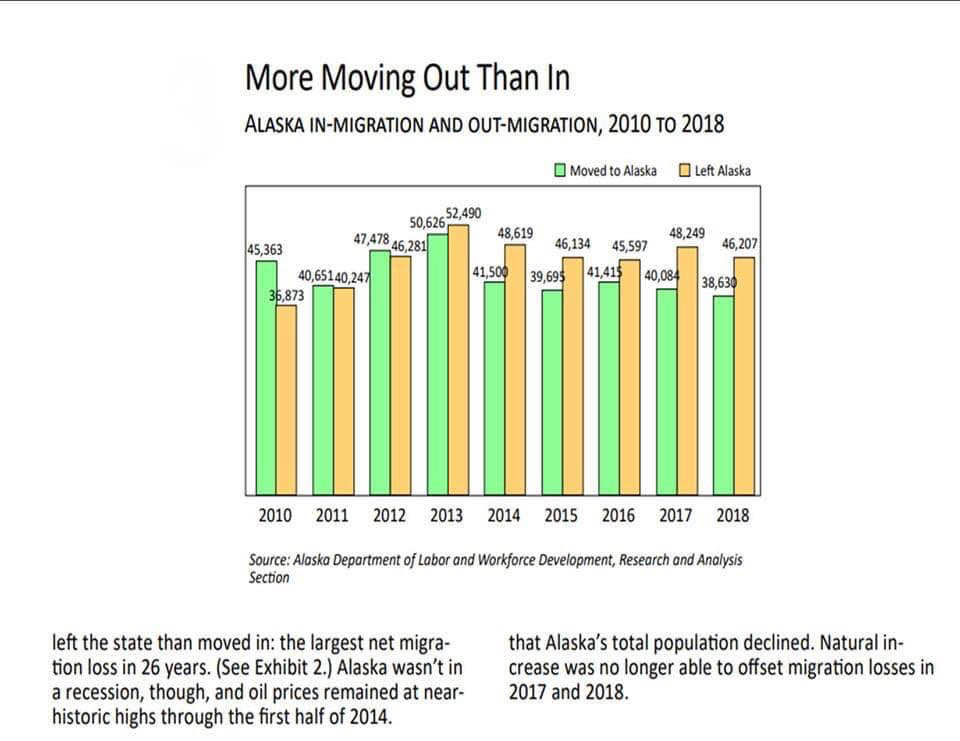 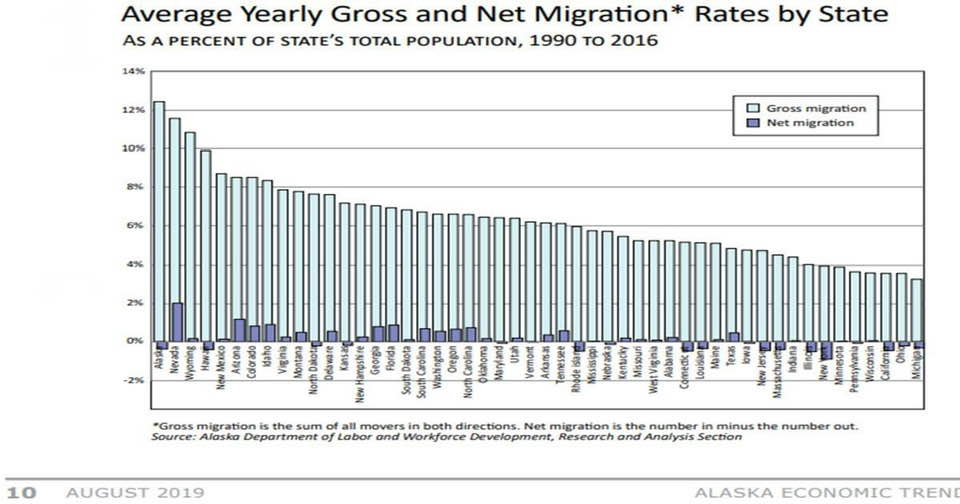 There has been a steady decline in Population & the trend started to become really noticeable in 2014.  There has been around 7,000-8,000 more people a year moving out of of our State, then are moving in. Roughly 35,000 people have left our state over the last five years.  Even more more now due to all the permanent job loses created by the Pandemic.  All of the jobs lost here, have been in the private sector, while during this same period of time this occurred, government jobs have done one thing.

The more I dig into the report and the breakdown they provide for all of us to see. It became very clear, Democrats, Rino’s, MSM, Non Profits and all the rest of the Socialist Left Leaning organizations don’t care that they are lying to us all about how many jobs have been lost over the years & how many more jobs we have lost permanently because of Covid-19. Once again…  They want you to believe this is all the Governors fault and those who don’t wear masks.

Our Private Sector is one by one being swallowed up by Government Positions.  This year, here and now in 2020.  This trend has never been more evident.  Thanks to Covid-19.  Nearly 40% of all small businesses in Alaska have closed their doors forever.  The oil Industry has downsized nearly 6,000 Jobs since the start of the Pandemic.  Yet our Special Interests of Alaska continue to hire new people and our government has done the same.

Here is a list of Alaska’s Unemployment by regions in Alaska:
https://live.laborstats.alaska.gov/labforce/

As long as Alaska’s Government, Non-Profits, Alaska Unions, Special Interests Agenda keeps happening and they get the bulk of the money. They don’t care how many men, women and children they have to steal from and shove into poverty, as long as they get theirs.  Take note, that the bulk of the money Alaska has received from the Cares Act Money has gone directly into the pockets of those I just listed.  Anchorage is a prime example of what has happened.  In Addition, just like the Cares Act Money, Our PFD’s that are being stolen from us all, also goes directly into an ever growing Socialist Programs that didn’t exist 10 years ago.

The small list of Special Interests pocketbooks that are being lined can be found by following this link here.  What is happening is a prime recipe for disaster, our population in Alaska is Declining, the tax base is shrinking, good paying jobs are leaving our State in record numbers.  Yet our spending is doing only one thing year, after year.

So who are the “Special Interests of Alaska?”
Click this link here to see an nearly complete list of them all:
https://politadick.com/who-is-recall-dunleavy/

Some examples are places like Alaska AFL-CIO, Rasmuson Foundation, NEA Alaska, CIRI, Recall Dunleavy and Save our State who don’t like having reports like this one shared. They want you all to believe the cuts to the budget are causing people to pack up and leave. History of Alaska’s population throughout the years says they are just Fear Mongering to the masses to further their Socialist Agenda.

The color coded map above clearly points out the only growth that is happening, in Alaska, is in the Matsu Valley. The only other real growth is in the Kenai Peninsula. Both are strong Republican controlled areas and are not under Democrat controlled Assemblies or Community Councils.  No surprise to see Anchorage and Fairbanks has the largest reported amount of people leaving as fast as they can. Both areas are under firm Democrat control. The Mayor, Assembly, School board in those areas keep the Socialist Experiment growing on a yearly basis. Their Property Taxes are some of the worst in Alaska and the don’t make it easy for Businesses to be in Business. Regulate and control their income, making sure a huge piece of the pie goes to government to pay for all their Social Services they provide.

Below is Pictures of the unemployment in Alaska from 1975-2018 and from 2012-current.  Look at the current statistics during our Covid-19 Pandemic….  What they don’t show there is all the people who have not filed for Unemployment, Just lost their jobs again from the newest lockdowns or all the Small Businesses Owners who have closed their doors forever who can’t collect unemployment: 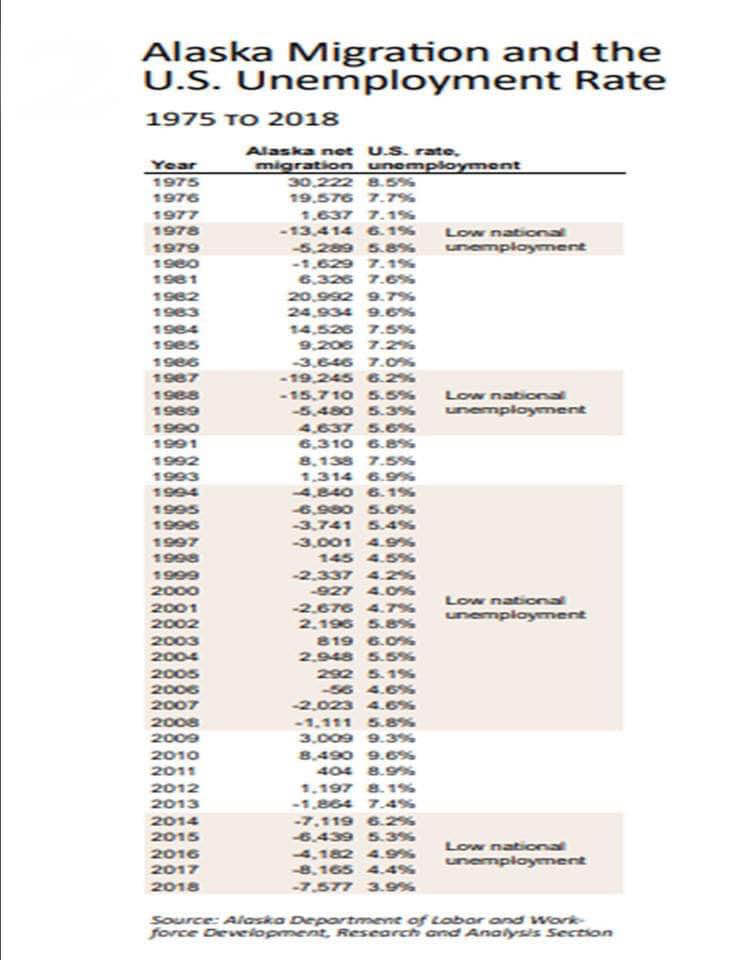 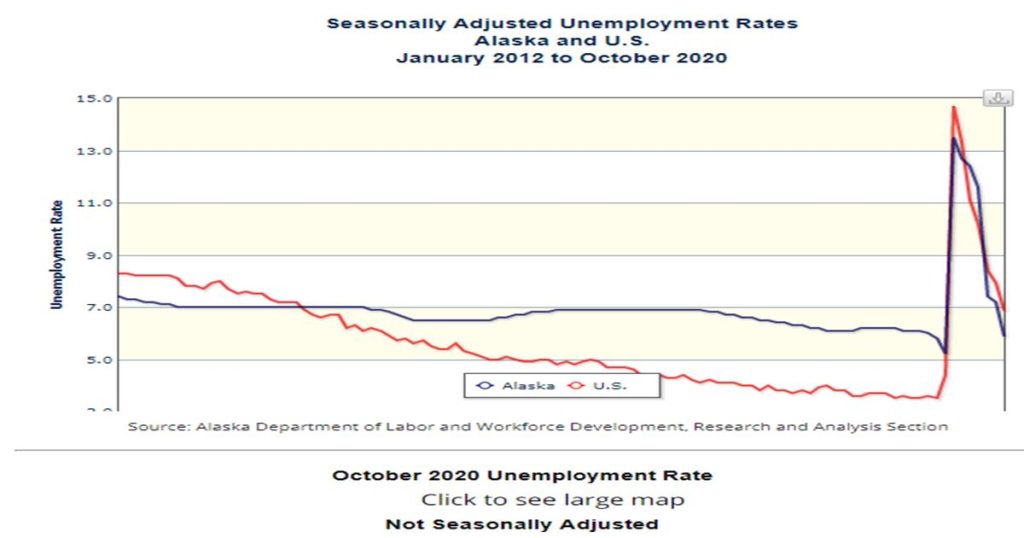 I hate to say I told you so. But I have been sharing this information since August of 2019.  January of this year (2020) Local Media has finally started to come out with this information.

So why does the budget keep growing, when the numbers show our population is continuing to shrink?

Alaska’s Population isn’t growing. The numbers they provided prove our population here is shrinking. Working age adults are moving to where they can find good paying jobs. Soon we will have more people in retirement, then those working here.

Wake Up Alaskans and realize they are taxing us more and more to pay for the ever growing government and the Special Interests that they are giving our money to.  If you think I’m lying about being taxed.  You have received $7,700.00 less for every person in your household.  They have stolen $7,700.00 from every woman, child, man in our State over the last 5 years.  For a family of four that comes to $30,800.00 they have taxed you (Stolen from you).  Just think what that money could have accomplished for our Families, Businesses, Our Survival this year, during the Pandemic we are all in the middle of….

Since 2018-2019 Alaska has lost over 8,000 people. Biggest hit came this last year from Anchorage, with nearly 3,000 people moving out. No surprise by that one. Mayor Ethan Berkowitz and Assembly have done a good job raising taxes up so high. That nobody wants to live there.

Anchorage is going to lose a minimum of 11,000 jobs by the end of the year. Places like the Perfect Cup in Anchorage Dimond Center Mall, who has been in business for the last 22 years has been forcibly closed down and now have closed their doors forever thanks to the Dictator Socialist Democrat Mayor & Assembly that are running Anchorage with their Draconian Lockdowns.

Does the Mayor and Assembly of Anchorage care? Not one little bit. It’s not their businesses that are losing it all. The ones like Alaska AFL-CIO, Rasmuson Foundation, Non-Profits, The Businesses that Mayor Ethan Berkowitz owns have received Loan after Loan from the Cares Act. They closed down streets to keep their businesses and Partners well taken care of during these trying times. Sad state of affairs those in charge have made of Anchorage.

Alaska was Once know as the Land of Opportunity.  Not anymore…..

Don’t just take my word for what will happen due to the Lockdowns… Here is a link to what the Experts are saying…..

The number of jobs to be lost in Anchorage have now gone from 11,000 to 16,000 and are expected to keep right on growing. With the premature announcement of MSM declaring Biden is now our next President, Alaska’s future is looking to be extremely dark. If what Biden has declared as his agenda to push the Green New Deal, Shutdown all new Oil exploration in ANWR, stop the Roadless Rule that was just passed for the Tongass National Forest, Pebble Mine Project being completely shut down, Bankruptcy is to become our New Normal that Alaskans can expect.

So what will happen next?

First expect announcements to be made that the oil companies will be pulling out of ANWR. Expect to hear those same Oil Companies announce major layoffs to happen over the next few years and any new mineral extractions being developed to come to a screeching halt. This include all timber in the Tongass National Forest and companies like Doyon Mining opening new mines in the interior.

Here are the new Projections of Jobs Lost just in Anchorage due to small businesses closing their doors forever because of the Draconian Lockdowns the Ex & Acting Mayor have imposed there.  Take note that what is below was before the announcement of them locking Anchorage back down for the month of December:

One good piece of news though. Ballot Measure One doesn’t have a prayer of passing. This might slow some of the reductions down for a short period of time.