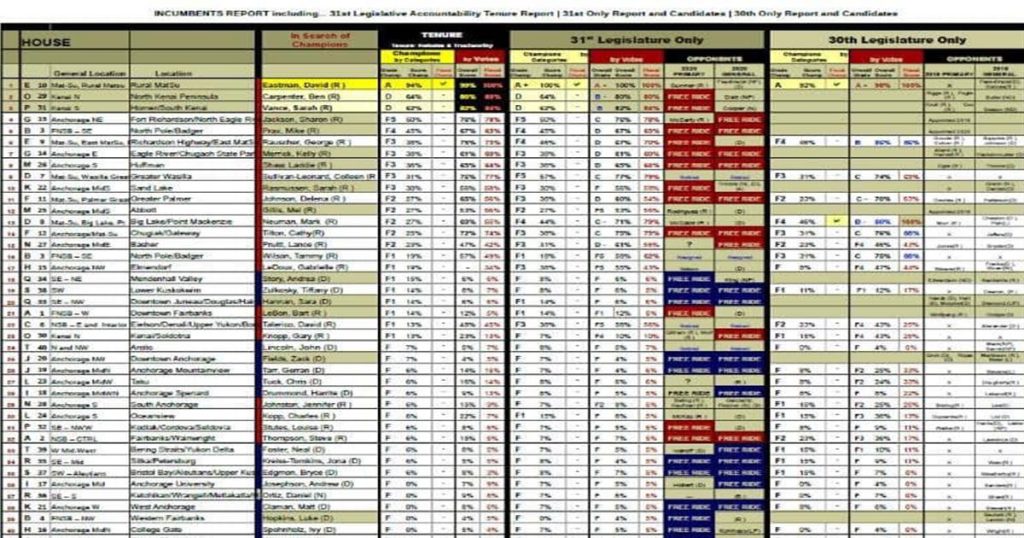 Alaska Incumbent Legislators don’t like it when I share posts like this one. It shows us Alaskans how effective they really are when they are in Juneau.
“Facts Matter”
That’s why Legislators don’t share them themselves…..
If you see a Legislator that has a “B-” Score and you are sure they are pieces of Crap…. Odds are, they Sold Out Our Voices/Votes to be in the Illegal Binding Caucus. They Voted “Yes” to the State Budget & Capital Budget.  They Voted “Yes” to Stealing “Alaskans PFD” to pay for it all & they Voted yes when they needed to have the 2/3’s Vote to spend from the CBR (Their Version of Our PFD)

So the big question is to know it’s time to replace any given Legislator that want to go back to Juneau? Again if they Score a B- or less when ranked, they need to be replaced.  Those Legislators only care about the Special Interests, selling out our Voices and Votes over t just 10 people total in the House and Senate who are deciding how the others will Vote On.  Now because they sold out to be in the Illegal Binding Caucus.  They sold their “Yes Vote” to those in control before the Session had even begun without even knowing what would be in the final bills.

So how effective they are when in Juneau.

Alaskans need to Know who you are voting for and understand why the incumbents that the Far Left Democrats & Rino’s have targeted and are making sure you don’t ever learn the truth.
The number one reason they are going after people like Rep. David Eastman, Senator Shelley Hughes and Senator Lora Reinbold and a few others is because these legislators refuse to allow their Voices/Votes of their constituents voices to be silenced by Selling our Votes/Voices to the 10 in control of the Far Lefts Illegal Binding Caucus Agenda in the House & Senate.
For those who want to look up their legislators score card looks like from prior years.  Here is the link.  It doesn’t have the 31st Legislative Session in it yet what has been provided in the picture above was put together by Hac & Sac Alaska:
https://alaskabusinessreportcard.com/historical-record/30th-legislature-report-card/
EXPLAINING OUR INCUMBENTS… THIS EXPLAINS A LOT | May 30, 2020
For freedom loving ALASKANS ONLY : https://hacsacalaska.files.wordpress.com/2020/05/31-resume-vote-tracking-202005230c-may292020-candidates-only2-pdf1.pdf
How to understand the results posted in the picture:
This list is not in order by the most Valuable Legislators based on just their voting record only. Do not let the order fool you. Next focus on the Category Grade and Score. That is based on reliable, consistency and trustworthy votes. No game playing. The “by votes” columns are just that.
Candidates who’s seats are not in jeopardy: A red block or blue block depicts NO OPPOSITION but basically a “Free Ride”. This does not give voters anyone else to vote for. Now look at the scores again. The 30th legislature and 31st are laid out for you. Mostly, ALL I SEE IS MORE OF THE SAME.
Alaska has one champion. ONE, that consistently votes to protect the rights of you, your family and all future generations. JUST ONE, Rep. David Eastman.  (Foot Note here…  The Republican Party tried desperately to have him removed from office this 2020 election season.  Why did they do that?)
I believe this clearly explains why our legislators plowed through well over $17 billion in our savings, have cut the PFD 5-years in a row, and continues to massively overspend with programs we cannot afford, could not afford and cannot sustain.
How did we get to where we are now?
“We elected them.”
The money is gone and our elected officials are now looking at you and your pockets to keep feeding their insatiable appetite for spending like they have for the past decade. They are going to this year look at taking “All of OUR PFD’s, Double the Gas Tax we pay at the pump, Add Income & State Taxes.
LOOK AT THE GRADES AND SCORES.
All legislators are graded on the exact same scale. No favors.
We were actually able to Vote in fiscally responsible candidates this year, but it was not enough.  Please take the time to encourage those who are returning to Juneau in January to “Follow the Laws” that we have.
Detailed voting records and reports can be found here: https://hacsacalaska.wordpress.com/31st-house-detailed-voting-record-accountability-caucus/?fbclid=IwAR03M_Ru0H2S4khZhiurxaff4BZF_uRxJHg4sL_itCnIGWwke8cq-guELcs
Thank You Pam Goode for providing the information above.
Below here is a link to the original posting of this on Facebook.  The picture there is of better Quality and can be blown up for easier viewing.
Share on facebook
Facebook
Share on twitter
Twitter