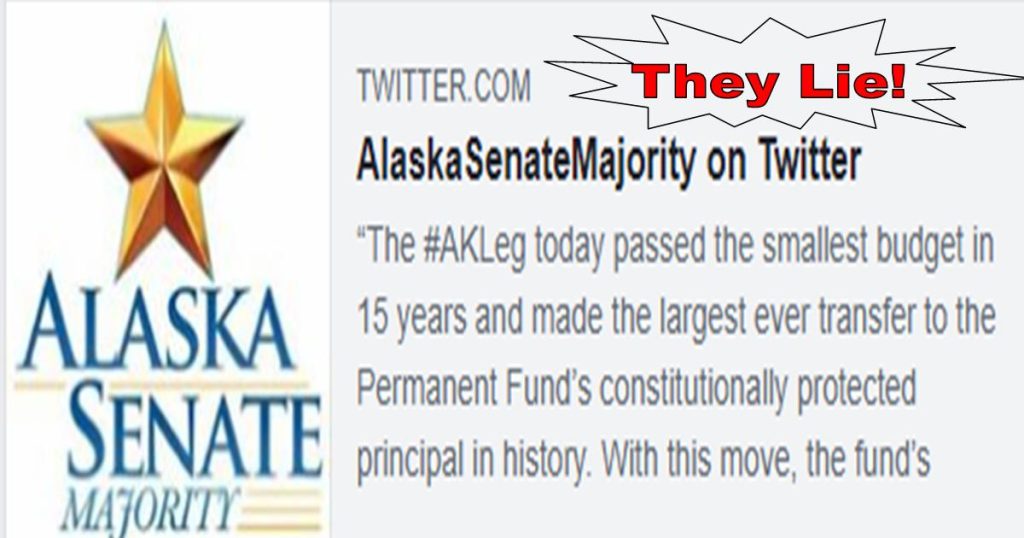 The first time they made this claim was back in June of 2019.

Telling us all then, the $4.4 Billion Dollar Budget is the lowest it has been in 15 years.  So what really is the truth?  Below I will break things down from the beginning.

So where do they get this make believe number from? First they took a bunch of budget Items from the UGF side of the budget and moved it into DGF. They call that a cut by shifting which portion of the budget it comes from. Just like the Wizard of Oz. Don’t pull the curtain away or you will expose the smoke and mirrors they are using to hide the truth from us all.

Next by not following the law, have failed to follow the Statutes for the PFD and the $10.2 Billion, is actually $12.1 Billion Dollars. So another lie is exposed.

Bragging about putting money away into the Corpus of the PFD and making it seem like they are hero’s for doing what they have failed to do the last four year. You know by not following the Law. They are not hero’s. The thieves are finally doing what the laws said should have been already done all along.

Their budget still doesn’t provide appropriated funding for K-12. Total there is another $1.3 Billion more. Since them and us have no clue how that is to be paid for. Makes it ripe to see the “Big Red Pen”. Can’t pass something that isn’t paid for. If Governor Mike Dunleavy Doesn’t Give it the “Big Red Pen”. They have slipped another $30 Million dollar increase to that budget for “Early Education”.

They say they cut $190 million from the budget. But added back in $40 Million for the new crime package. Doing the math again that’s only $150 Million that has been cut. $30 Million more for “Early Education”, now we are down to only a $120 Million in cuts.

Why is MSM letting them get away with these lies over and over again? Why are they not exposing the truth for all to see?

So let’s do the math to see where the Budget truly is at, when it is all done.

Yes you just read that right. The Total Budget is $13.4 Billion Dollars with a B.

But I just can’t help myself………

“The Swept” put About $10 Billion More back into the CBR and the Legislators in Juneau are required to “Reverse Sweep” that money back, by having a 3/4 approved vote to make it happen. They currently have Failed to do this.  (They use “The Sweep & Our PFD’s” as Blackmail to Vote for the CBR using the “Illegal Binding Caucus Rules” to make that happen.)

Now it does appear to me, that they have a surplus sitting there right now to pay 100% of this years budget, without having to Steal more from our ERA (PFD “Earning Reserve Account”), to cover their shortfall. Far cry from the $1.3 Billion they started out with. This is far from a balanced Budget. They still need to pay that $14 Billion they have stolen from the CBR back. But at least it’s a start in the right direction.

Lets do the math:

I Want to make one thing Crystal Clear Now. The PFD is paid from The ERA and it has $19 Billion in it. The $1.9 Billion to pay our “Full PFD” is already done by using that money only and is not an budget Item to be paid, from any other place.  (Yet they used “State Taxes” to pay a portion of the PFD.  Something up to this point has never happened before.  It was always been a “Transfer from the ERA”.)

Time for some math:

$9.8 Billion Dollar Approved Budget after Vetoes
$1.3 Billion for Education in Budget and is not paid for. (In the middle of a Lawsuit to be determined by Alaska’s Far Left Courts.)
$1.9 Billion for PFD not in Budget But is paid for using the Statutory Formula to pay our PFD’s.
=$13 Billion Dollars for the Total Budget.

$10 Billion Captured by “The Sweep”
$2 Billion in the CBR
Giving them $12 Billion Dollars in total Revenue that can be Used/Borrowed for another year, to cover the Budget and The Reverse Sweep.

Let that last number sink in for a moment as these budget debate continues.

Update 7/31/2019: They are now back up to a $11.5 Billion dollar budget, this doesn’t include the $1 Billion for the $1600.00 PFD.  Far cry from the $3000.00 Statutory PFD they owe us.  Don’t forget we have $19 Billion in our ERA to pay a full PFD from.  But because our Lawbreaking Legislators think that money belongs to them and not us Alaskans who rightfully Own every penny that is there.  They ignore following the Law to keep pushing the Far Left Agenda they have in play to take it all.

Yes you read that right. In 2004 they only spent $9.65 Billion dollars on the State Budget. Yet claim they are now at the lowest levels since 2004 and this was before the Vetoes happened. Since, by doing the math. $11.5 Billion is where they are at now. That means they are still $1.85 Billion shy of being at the 2004 levels they claim they are at now is the “Smallest Budget in 15 Years”.

So why did they, continue to take the extra Billion out of the PFD’s ERA? If they have no plans to pay it to us? Total Budget including the Reduced PFD, only comes to $12.2 Billion Dollars. They Approved $3.2 Billion Dollar withdrawal from our ERA Account. If they are paying a reduced PFD. They should only be pulling 2.2 Billion which covers their share they get and our Reduced PFD. Their Share is $1.1 Billion plus 5.25% and our $1 Billion, to pay our PFD’s.

Something really stinks In Juneau. I think its from all the Crap they are shoveling….

Update September 1, 2019: Really sad when you know the outcome of what gets Vetoed and how much money gets put back in again. It was pretty easy to figure out. Once they cut the PFD. Many of the programs added back in again was due to the fact. A full PFD would have paid for them to still be Vetoed and those affected would have still come out way ahead in the end.

$12-$12.2 Billion Dollar total budget. Don’t be fooled by the number that the Lawbreaking Legislators are throwing out there. They won’t tell you they still haven’t funded $1.3 Billion for K-12 and depending on the MSM or Far Left source you are getting your information from. Probably didn’t include the PFD in their total either.

Updated March 13, 2020:  It’s Friday the 13th, 3/13/2020: Did you hear the latest? They came out in just this last past week and claimed once again, it’s the Smallest budget in 15 years. I did the research and gave this one 4 Pinocchio’s from their claims about last year and this year…..

Would have been the largest PFD to have ever receive. But just like the previous 4 years this was just another lie they wanted us to believe. Instead they took half of it again and then changed the way it is to be paid, by turning it into “Tax Revenue”. Guaranteeing they will use it for generations to come to pay for Special Interests.

You won’t find the budget broken down this simple anywhere else. Learn the facts about what last year was, so you are not believing the same lies they are going to spin again this year.

$11.1 Billion and they Still haven’t paid a penny to us for our Statutory PFD with that total. Once again the Alaska House and Alaska Senate are coming out and claiming the Smallest Budget in 15 Years. They Lie, Lie, Lie:

This is a $800 Million Increase over last years Budget. So sick and tired of the Lawbreaking Legislators telling us all the lies making claims the budget is “Flat”. That they made no increases. How they focus on look what we did for all the Socialist Programs. Just ignore how much more we are now spending on them.

Two years in a row they made this claim about Alaska’s budgets.

They keep lying to us all and for some reason, Alaskans keep voting them back into office again.

Each and every Alaskan should be seeing $8,700.00 this year. Instead they gave it to the same Government and Federal Employees that are currently getting paid to sit at home doing nothing. While the rest of us Alaskans are losing it all.

They keep spreading the same lies. They have only cut from the Capital Budgets Budget. Making claims that those cuts mean they are spending less money. If you look at where the money is spent every year. The budget has doubled from what it was 15 years ago.

Stop believing their Lies. Those in control of the Alaska Senate Majority, Alaska House Majority Illegal Binding Caucuses think we are all “Too Stupid” to know what they are doing. They purposely keep from telling you the truth, thinking their lies, if said over and over again enough times, it will somehow magically become the truth, just because that is what they say it is.