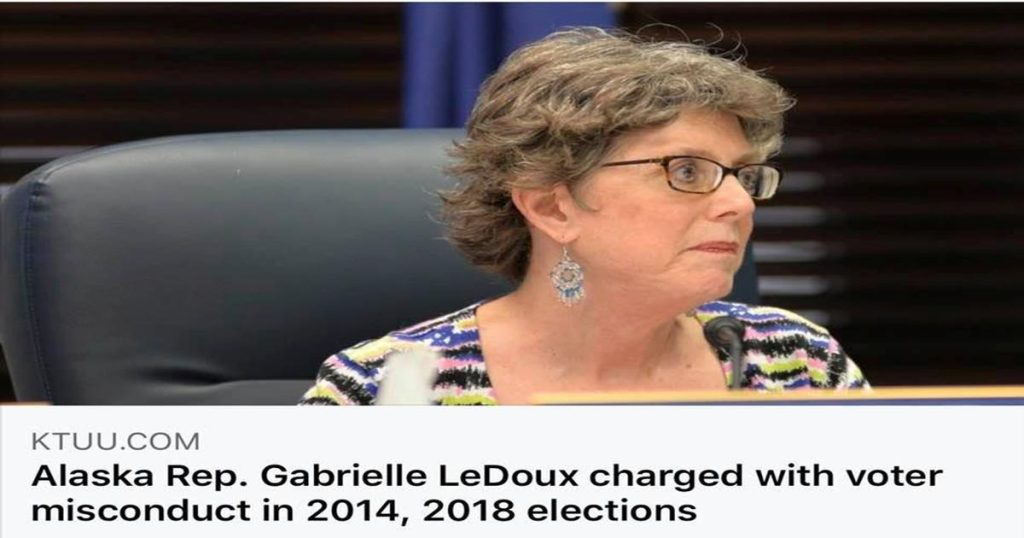 It’s about time we got rid of that Rino Representative Gabrielle LeDoux & voted her out of office. She has flipped over to the Democrats side more times then I can count over the years. She is one of Alaska’s Original Muskox.
Did you hear why she voted for the Veto Override in January? She did it, because she knew they didn’t have the votes and was doing it for Political Motives just to make herself look good. She outright said this is why she voted Yes.
Video just below here is when this happened. Listen for yourselves what she has to say:
By now you have heard she is also up on charges for Voter Fraud. Time to get the bad rubbish out of our Government and Vote in People that are ready to work for us Alaskans and not the Special Interests.
===========================
From David Nelson for State House:
A new voice is needed down in the state capitol, a public servant who will prioritize ethics and virtues and not whatever will keep them in office.
I am asking you to check out my website, so you can join our team and donate. https://nelsonforalaska.com/
Official Nelson for Alaska press release
HOUSE DISTRICT 15 GOP LEADERS SAY REPRESENTATIVE LEDOUX HAS BROKEN FAITH WITH MULDOON AND JBER VOTERS.
Republican leaders in House District 15 have called the multiple felony and misdemeanor charges of voter misconduct and unlawful interference with voting that were filed yesterday against their incumbent Representative Gabrielle LeDoux a breach of faith with voters in their district.
“That was a sad day for House District 15, but not an unexpected one,” stated Madeleine Gaiser, the district’s Republican Party Chair. “Representative LeDoux’s questionable campaign tactics have cast a cloud over our District and the Alaska Republican Party for the past several years. We’ve lost faith that she can represent us honestly.”
Gaiser explained that, on February 17, the District 15 Republican Convention passed a formal Resolution withdrawing support from her candidacy and pledging to recruit and support a candidate to candidate to oppose her in the 2020 Republican Primary.
“We are very happy that David Nelson has stepped forward and filed to run against her,” she declared. “We feel that David Nelson better embodies the vision and values of Republicans here in District 15 and plan to throw our full support behind him and his campaign.”
“Honest and fair elections are the cornerstone upon which our representative government is built,” David Nelson stated. “It’s impossible to have honest government without honest elections. The Primary Election on August 18 will give us the chance to send new people, ones that we can trust, to represent us honestly in Juneau.”
House District 15 includes the East Anchorage neighborhoods of Muldoon and Creekside Park as well as the Elmendorf section of the Joint Base Elmendorf-Richardson (JBER) military reservation.
Link to Full Story about Rep. Gabrielle Ledoux charges:
https://www.ktuu.com/content/news/WATCH-NOW-Dept-of-Law-to-announce-criminal-charges-568779611.html

The corruption in Alaska is very real when it comes to our Elections. Too Many of them have been won by just One Vote. In 2018 we had a district that was decided by flipping a coin and calling heads or tails. Even though those in charge of our elections here won’t admit it… Ballot Harvesting is a very real thing.
Get Involved in what is happening in our State. Time to demand Election Integrity to be of utmost importance to have happen.
Here are a few things that we know they can do, to make sure our elections are not compromised here in Alaska.
1. Voter ID required for all Ballots casted. This includes sending a photocopy of your ID in with “All” Absentee Ballots.
2. Paper Ballots Only
3. All Recounts will be done Manually if requested.
4. Ballot Harvesting made Illegal in Alaska
5. Remove All Felons off our Voter Rolls
This list is just the beginning of what needs to happen. Alaskans should be demanding they become law.  It’s Time to finally eliminated the corruption that is obviously here, that nobody wants to admit is really happening.
All throughout Alaska Absentee Ballots are being used far beyond what Alaska has ever seen. Our Election Board has not removed a single person who has died or moved from their Voter Rolls. Reports were coming in of people receiving Ballots that don’t belong to their households. All Safeguards like verifying Signatures on the outside of Ballots has been removed.  This election is Ripe here in Alaska for Voter Fraud to happen.
When the Democrats in our Cities make claims that Voter Fraud doesn’t happen. Just share this article right here. Easiest way to shut them right down with their lies.
Here is a link to what is currently happening with the Ballots they have mailed out in Juneau for their Assembly and School Board Elections last month.

6 thoughts on “Rep. Gabriel Ledoux is a prime example why Ballot Harvesting should be Illegal….”