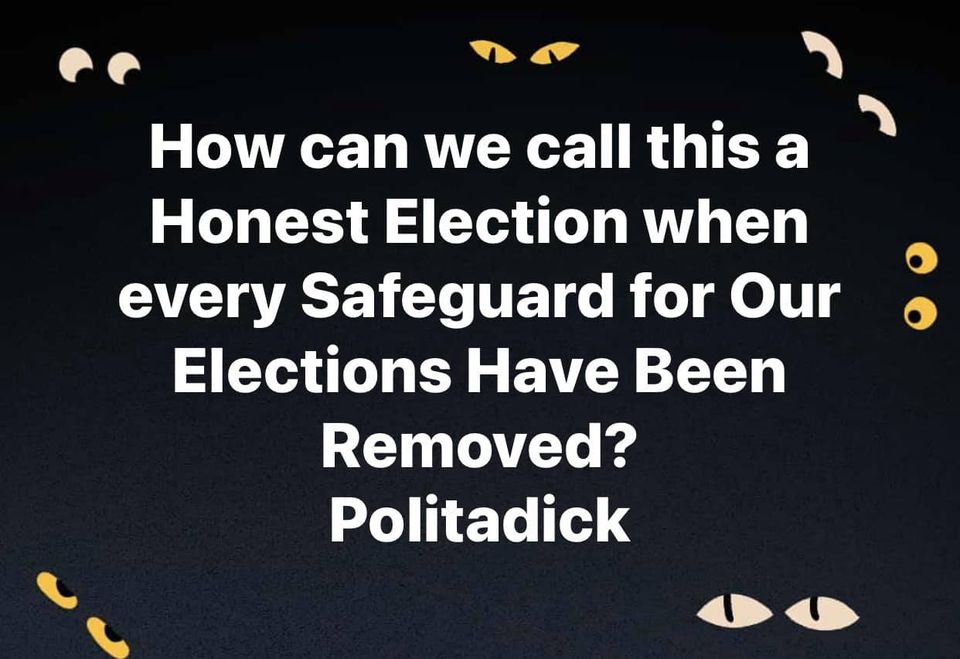 Here is a very simple question I have been asking for a very long time now.  When every Safeguard that has been put into place over the last 244 years here in the USA have been removed for this current election, how are we suppose to believe we are having a truly corrupt free election?

We have Supreme Courts in States declaring the Laws that Legislators and Governors have Approved are no longer Valid.  That what the Justices say they are going to be, is all that really matters.   When did we give the powers of “Writing Laws” to our courts?  Are they not suppose to be “Following the Law” and our legislators are the ones that write the laws?

When Election Laws are in place for “Poll Watchers” to be able to observe Ballots being counted, dates when they arrived, signatures, what candidates were picked, etc….  Are forced out of the rooms, told they have to stand 30-100 feet back from where the counts are happening, cardboard being placed over watchers windows, seeing votes being dumped by the hundreds of thousands for just one person at a time, stopping the counts for what appears to be trying to figure out how many more votes they need to create, to allow one candidate to win over another, watching people in poll places Identically filling out Ballots with Biden as the main pick every time and Stamping them as received, collecting ballots that have arrived days later and being counted, even though the laws in those states clearly express that they are not valid if not in by the deadline on election day, etc…..

Clearly we don’t have Honest Election happening in our Country right now.  Only an idiot would believe otherwise…..  A reckoning is coming and I’m afraid of what that is going to look like.