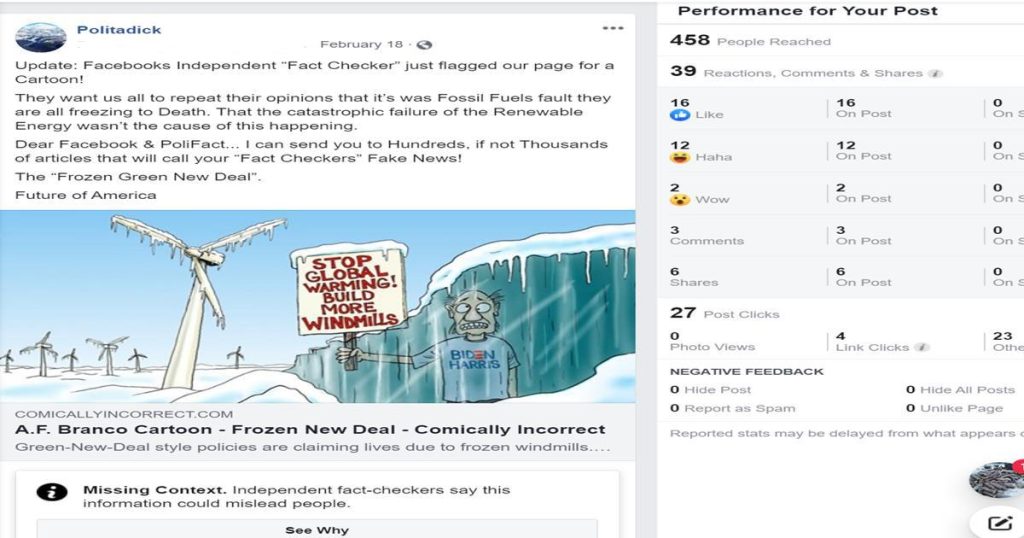 Once Again the “Fake News Fact Checkers” label another post as “Fake News” because it destroys their “Fake News Agenda” about the “Green New Deal”.

When a page like mine shares a post like this on Facebook.  The “Fake News Fact Checkers” that they employ, work overtime to find someone who has written something or posted something that is 100% “Factual” but doesn’t promote the Agenda that they are trying to convince us all is happening, so they can label it as “Fake News” and shutdown the posts reach and distribution to all of you.

So what happens to a page like mine when we get “Flagged” for sharing what they classify as “Fake News”, “Missing Context”, “Partially True” posts.

First they put a strike against our page in a section they call “Page Quality”.  This strike will be there for 90 days before it is removed.  The reach to those who follow our Page is then reduced.

Now if you get more than one of these against a Page.  They reduce the Pages Reach to it’s Followers down to less than 10% of it’s Followers.  If a page continues to get Flagged for what they claim is “Fake News”.  They then cut off all ability to run paid for adds and anything that would generate Revenue for a Page.

Now if a page, as Facebook puts it, Continues to Violate their Community Policies about “Fake News, Partially True or Misleading Content” they will find themselves removed off the platform permanently.  Like they did to President Donald J Trump and many other Conservatives over the last few years now.

So what can a page do if they get label with a post that they claim is Fake News.  Currently the only thing we can do is write to the “Fact Checker” and dispute what has happened & Provide them with Proof what was posted is “Factually True”.  (I have done this multiple of times”)

Sadly though, the “Fact Checkers” like the ones who they used for this post here, refuse to even address the “Facts” that were sent to them to Validate the Truth behind this post.  Which was very simple to do.  Nothing in this Cartoon matched anything their “Fact Checkers” stated in the Proof they provided that makes this Cartoon, as they put it “Missing Context” in the Label they attached to the post at the Bottom.

Until our Congress steps up and does something to stop Big Tech.  This is only going to get worse for all of us.  Unfortunately those in control of DC love that our First Amendment Rights are stomped on.  Why?  Because currently the Far Left Democrats and their agenda will never be Labeled with Fake News.  They are happy with the current Agenda that has targeted Conservative’s exclusively.

Green New Deal cost some home owners in Texas $10,000 for just a weeks worth of electricity that would have been around $100.00 for that same period if the Electrical Grid Green Energy wouldn’t have crashed all at the same time.

So what did this Power Failure cost the Average User for having to get power from other power plants that kept many of them running when the Green New Deal failed to deliver?