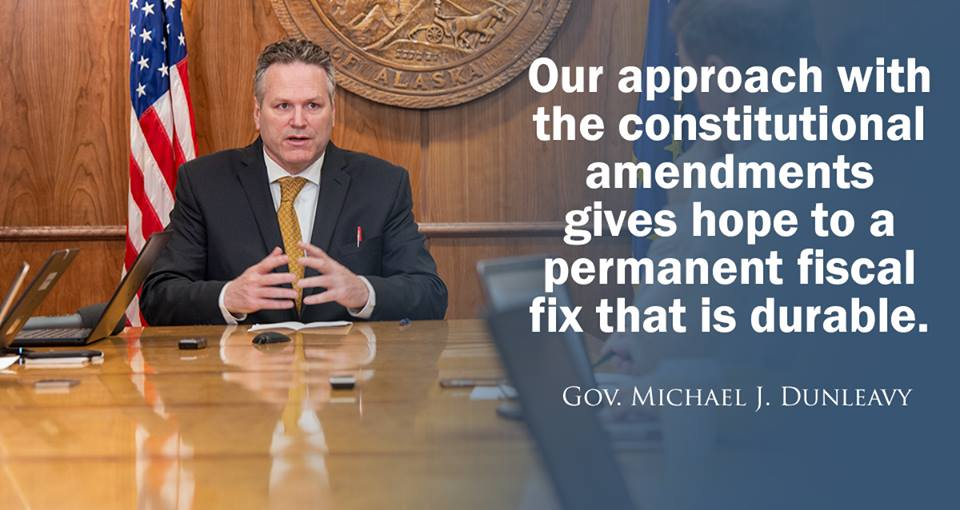 Keep Standing Tall for “All” Alaskans!  Keep doing what you are doing! We Alaskans have your back and you have a “Big Red Pen!” If your supply of pens ever runs low, just let us know!

Keep pushing them in Juneau to get your Constitutional Amendments passed through the House and Senate, to get them onto your desk to be signed.

Do you know where your Legislator Stands on these Constitutional Amendments?

SJR4: Taxpayers Bill of Rights.
SJR5: Protection of the PFD in the Constitution.
SJR6: Constitution spending cap reflecting our revenues plus inflation and population growth.

Alaskans are tired of them blatantly ignoring the Alaskan Majority. They clearly don’t hear our voices. They are just too busy listening to the Special Interests Minority and can care less about us anymore.

Keep Sharing Until they make it Happen!  Vote them out if they won’t.

As you know, the governor has proposed amendments to the State Constitution. In order for these amendments to go before the citizens of Alaska, we must obtain a 2/3 majority vote by our Legislators in Juneau for them to pass.

“Now what are they trying to do?”

SJR6/SB104: The Lawbreaking Legislators are trying to Add the PFD to the Spending Cap. This way they can spend All of our PFD’s so they don’t have to cut One Penny of the Budget.

$5.4 Billion is the budget they have this year. They want to Cap what they can Spend at $5 Billion and that includes paying our PFD’s from what will be left over.  Take Note… There is nothing left.  Stop the Theft and Demand they remove the PFD from the Spending Cap currently working its way through the House and Senate!

By using the Illegal Binding Caucus Rule, our Legislators have been stealing our PFD’s. If you would like to know how that happened. Ask Senator John Coghill why he forced, extorted, blackmailed, coerced, manipulated our Legislators into not Vetoing Governor Walkers First theft of our PFD’s. The Illegal Binding Caucus have made sure we Alaskans, have lost all our voices in Juneau. Year, after year, after year….

Don’t just take my word for it. Listen to what Rep. David Eastman had to say about it yesterday while talking with Save The PFD: